All around the world, designers and architects are using the BAUX acoustic tiles and panels in exiting projects for exiting brands. In a series of newsletters we aim to introduce you to a selection of projects and the mind masters behind designs of these acoustic artworks. We simply will call these newsletters Interviews #. 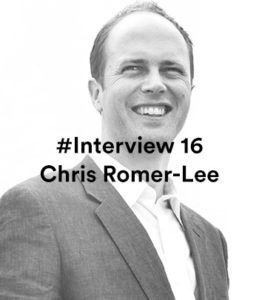 This week we are pleased to present a discussion with architect Chris Romer-Lee about the 4,300 sqm fit-out of MullenLowe Group’s London offices, carried out in 2015 by his practice Studio Octopi.
The five-story space, which houses all the MullenLowe Group agencies as well as the Group’s global headquarters, was equipped with a number of BAUX acoustic products. Chris Romer-Lee is the director and co-founder of Studio Octopi and Thames Baths CIC. He also teaches at Cardiff Metropolitan University.

Chris, what were your initial thoughts about this project?
That we were working on a small city. The agency required us to integrate 4 different brands, that all had a separate visual identity, in one building. The meeting rooms, café and reception were all shared spaces and became the public realm. Working as urban designers (on a workspace!) we ensured that there were a multitude of different scales of space across the building. From a corridor bench to a flexible café space or ‘piazza’ for all agency meetings.

Why did you choose BAUX products for the space?
BAUX was important because we wanted the space between meeting rooms to be break out areas. It’s often the space between buildings that provides some of the most engaging urban conditions in a city; we wanted to create something similar throughout the building. To enable these spaces to be open to the ‘public realm’ they needed to be quiet, so we lined them with BAUX Acoustic Panels. The panels were also used in the post production suites where a quiet and relatively dark space was key to the technical success of these spaces.

What is unique about the MullenLowe Group offices?
We presented the client with big opportunities for the building. To realize the design we needed to be shrewd with costs as the budget was tight. To achieve this we worked with referencing materials and patterns found in cities. Plywood from construction site hoardings was used to great effect across the scheme. The woven vinyl flooring was laid in various configurations to mimic the changing patterns of an urban ground plane. We spent a lot of time focusing on varying scales of material and space and how they might be read.

How did you use colour to transform the space?
We used colour to subtly delineate between the different organisations coming together within the building. The range of colours in the BAUX collection gave us a really exciting opportunity to vary the “inbetween” break out areas. As both spaces were also visible from the street the colours glow through the elevation in the winter afternoons or evenings. The lighting was playful and external in aesthetic, which further emphasized the red and blue BAUX tiles. Within the technical suites we moved from blue through to green. More subtle changes but each with its own colour and therefore identifiable from each other.

What is the importance of a well-designed acoustic environment?
In this office space it was important for the in-between break out spaces to be open to the corridor and workspaces to ensure that they were used for short meetings. The client stated that meeting rooms in their previous office were often occupied for hours even days, which meant less and less space available for a quick chat. There is a noticeable quieter environment when you enter the BAUX-lined in-between spaces. Noise created in these spaces is contained rather than spilling out across the work floor or into the adjacent meeting spaces.

What would a dream BAUX project look like?
An architect / artist collaboration where the BAUX is the canvas. Walls and ceilings fold and wrap to create a landscape of spaces, a vast canvas for colour and light to play across.

Visit the MullenLowe case to learn more about the project created by Chris Romer-Lee and Studio Octopi. Or visit the inspiration page for other BAUX acoustic interior design projects.